Your question has been successfully submitted. Thank you. 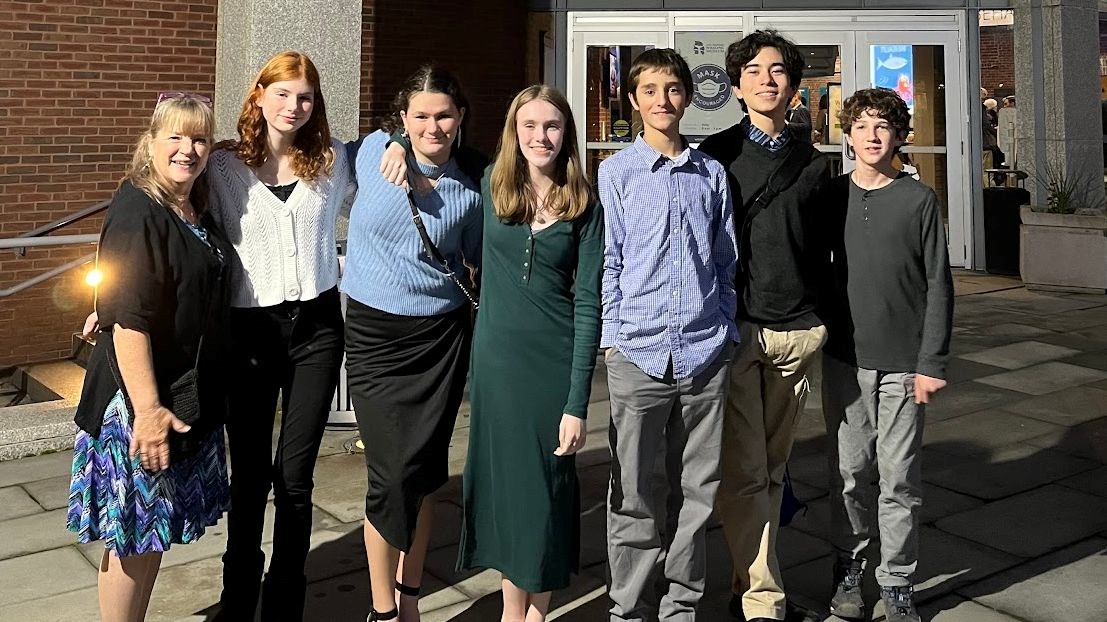 Last Friday evening, six students from the Gates Environmental Club and the Gates 7/8 Band attended the 30th anniversary celebration of Stellwagen Bank Marine National Sanctuary at the New Bedford Whaling Museum.   They were accompanied by Ms. Chambers, Mr.Lessard and Caitlin Fitzmaurice, who is a Gates and SHS alum and a research assistant at the Stellwagen Bank Marine National Sanctuary. 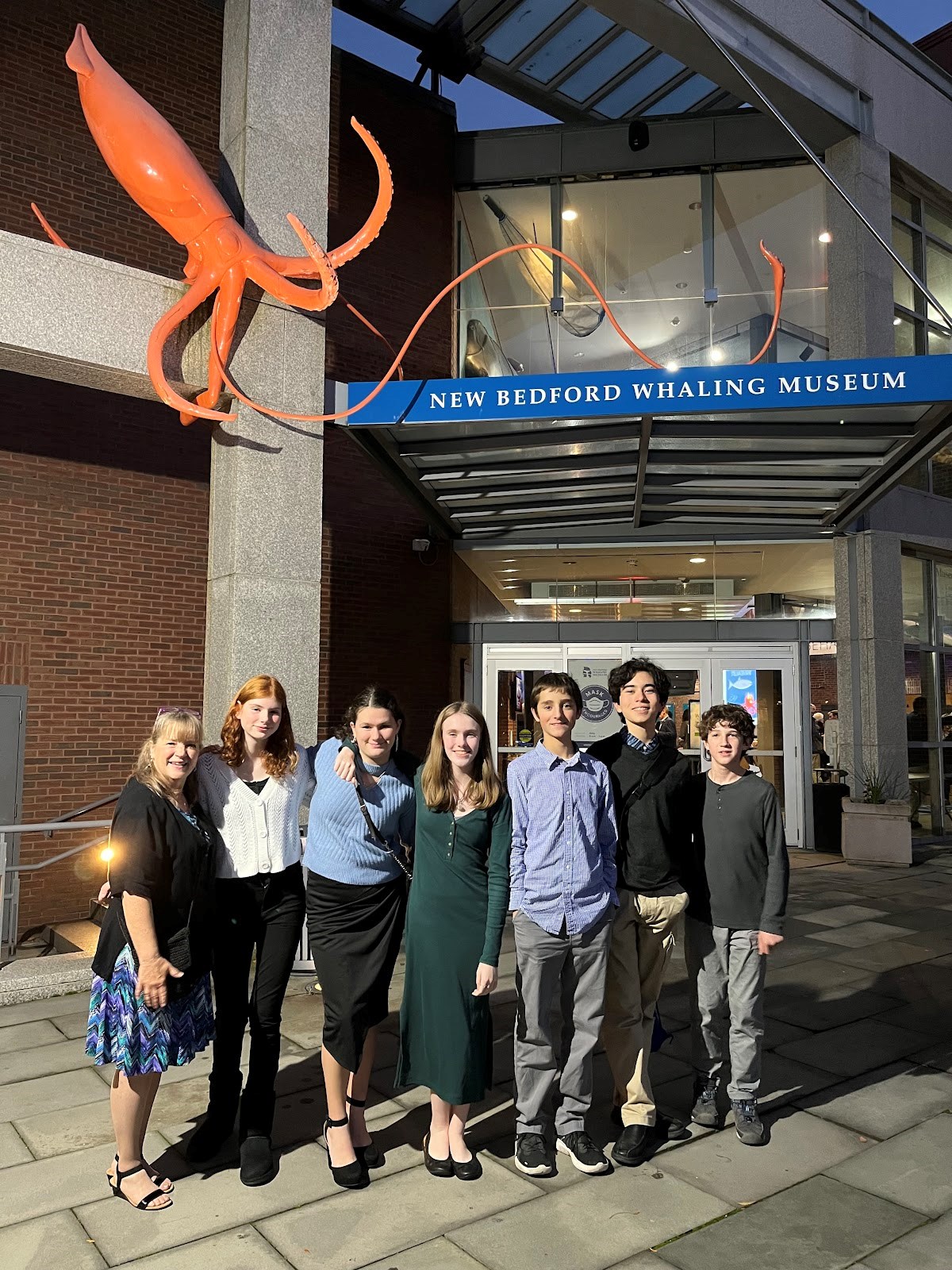 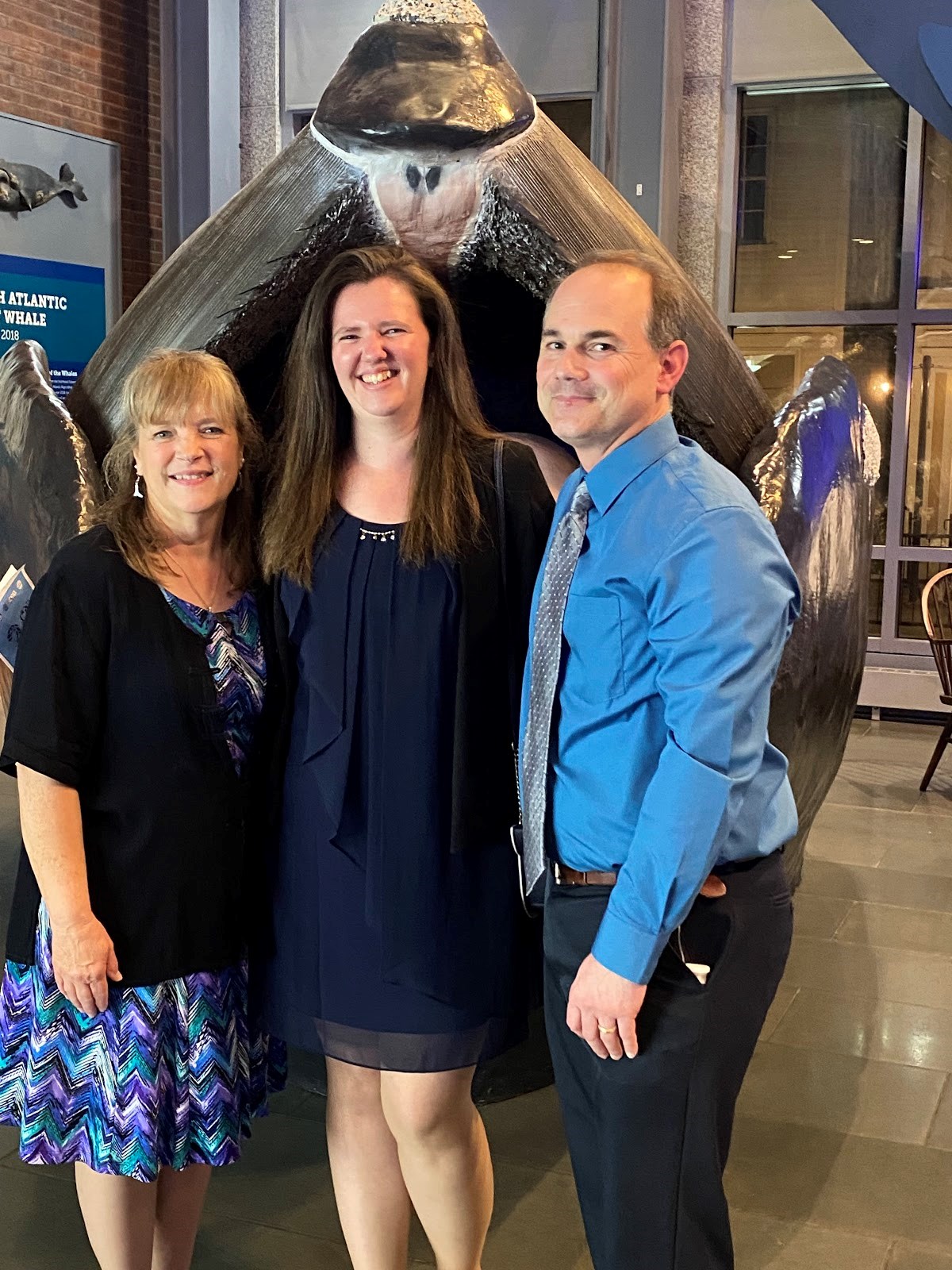 The Gates students took a brief tour of the New Bedford whaling museum where they came face to face with skeletons of enormous whales.  Standing next to the skeletons of Reyna, a 49 foot right whale and her unborn calf, student Noah Kermond exclaimed “Wow! The baby is longer than I am!”

Later, the students marveled at the skeleton of a 48 foot sperm whale and discussed Moby Dick.  They agreed that messing with a sperm whale was a losing proposition.  The students then boarded the half scale model of the “Lagoda”, a whaling bark from 1826.  The 89 foot model is the largest ship model in the world.  Noah Kermond was especially impressed by the ship’s bell which he was able to ring. 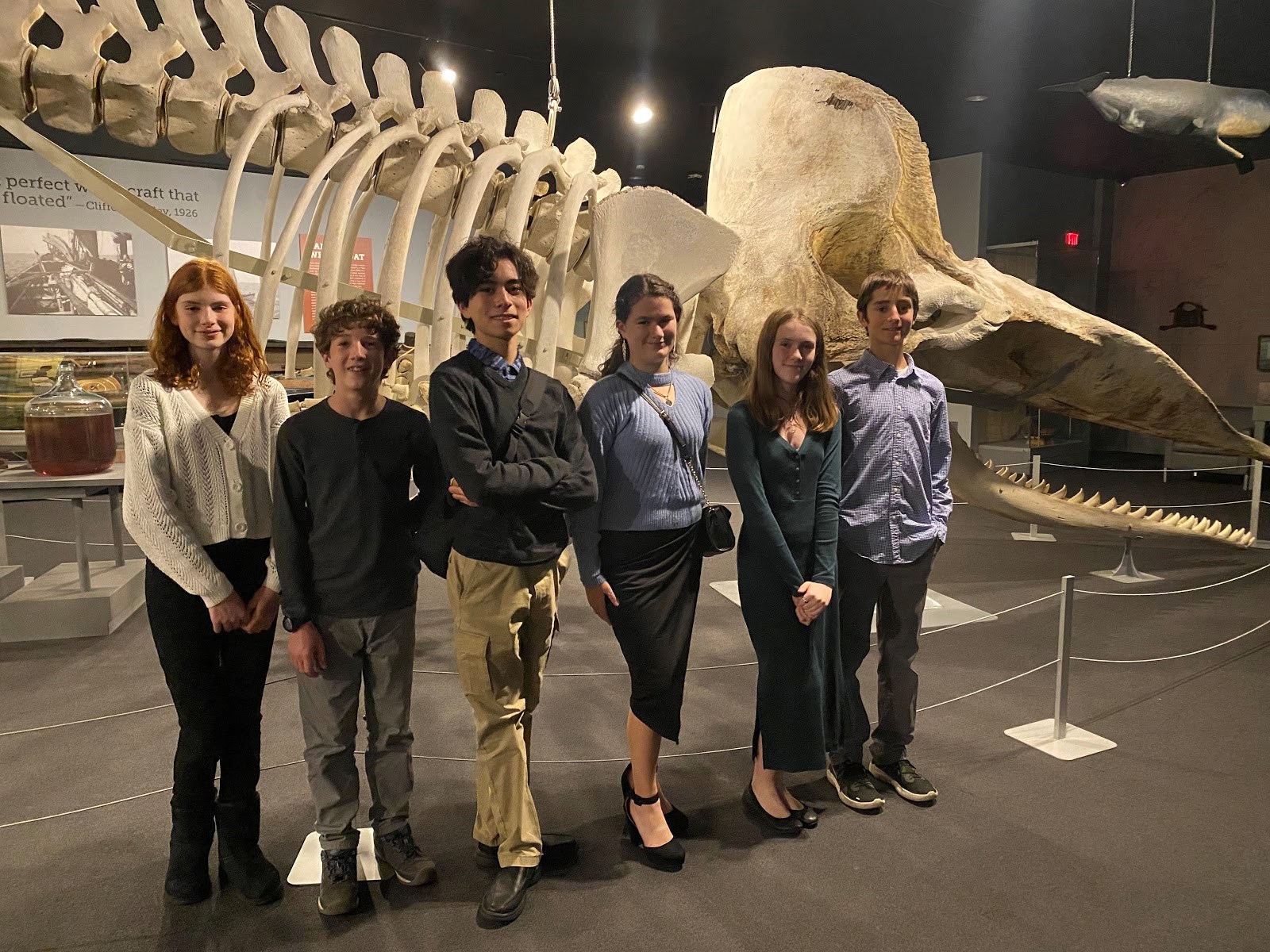 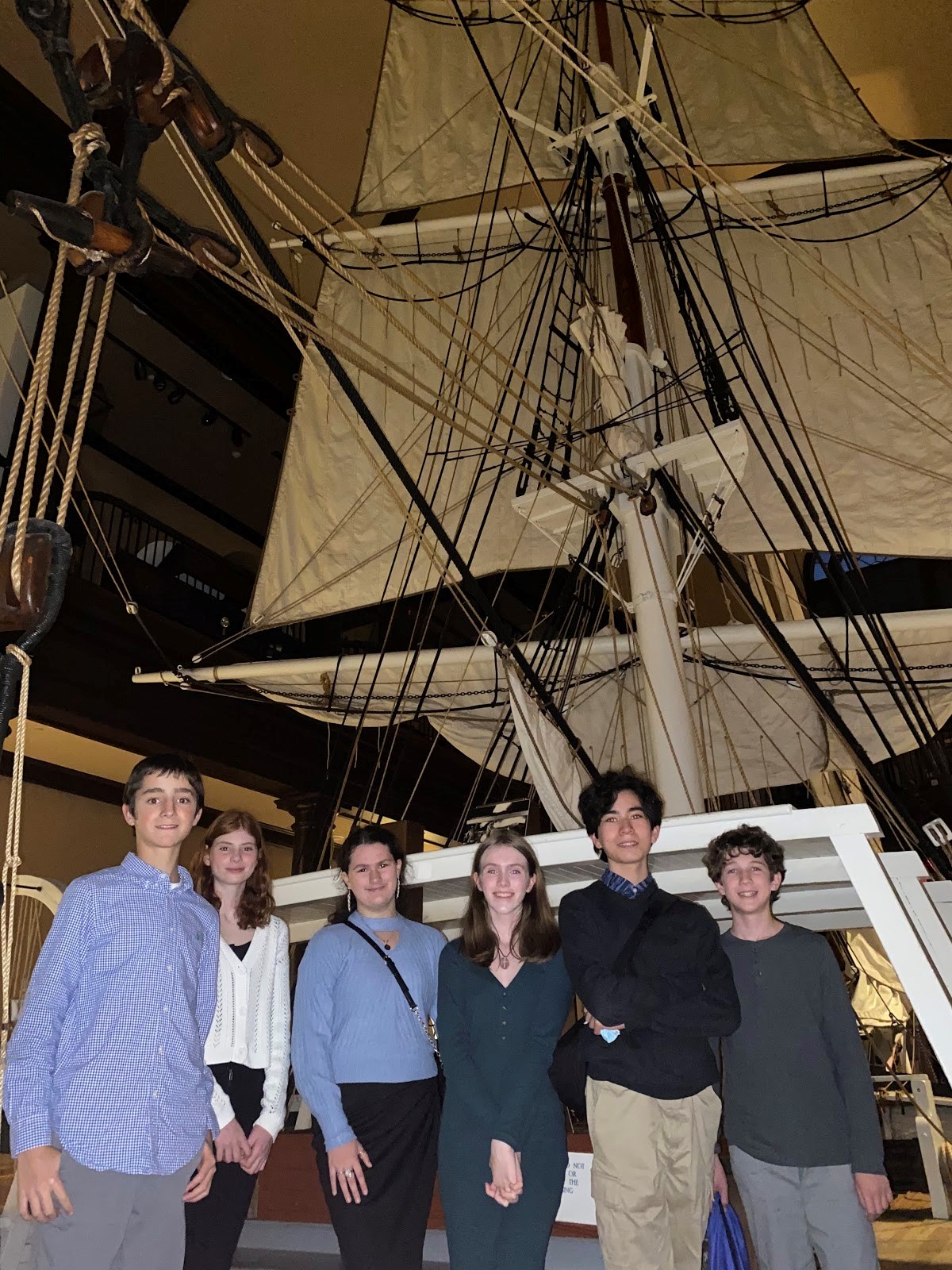 Celebrating with Politicians, Musicians and Whale Poo…Oh My!!

The celebration ceremony was a masterful integration of science, technology, poetry, art and music.  It was an amazing experience that showed the strength of interdisciplinary collaboration.  The NOAA scientists consistently remarked upon the need for the arts to effectively communicate their message.The evening commenced with a proclamation from the Governor and the Massachusetts Statehouse, read by Scituate resident Representative Patrick Kearney.   The proclamation congratulated all of the employees and volunteers at Stellwagen Bank for thirty years of outstanding service.

Members of the New Bedford Symphony Orchestra performed an overture composed and conducted by David MacKenzie.  The Gates students were particularly impressed with the musicians.

Next was the outstanding and amusing poem by Matt Harvey entitled “Praise the Whale.”  This poem masterfully explained the importance of the whale and its poo, which is in part responsible for half of all of the oxygen we breathe.  Michaela Whittaker loved the poem and its message.  She admitted that it challenged her maturity to keep a straight face during its reading.  “I was trying so hard not to laugh out loud!” she said.  You may hear Mr. Harvey reading “Praise the Whale” here: Praise the Whale - poem by Matt Harvey / Hot Poets | Whale and Dolphin Conservation

The Circle of Life

You can hear the music, read more about this fascinating game and play it here: Music | Stellwagen Bank National Marine Sanctuary

The presentation concluded with the world premiere of “The Evolution of an Ocean Composition” by David MacKenzie.   This four movement piece beautifully explores the interaction of the plankton, sand lance, humpback whale and shearwater in Stellwagen Bank National Marine Sanctuary.  The composition is a masterful representation of nature, using classical techniques in a modern manner.  The musicians were outstanding in their performance of the new work.  At the conclusion of the piece, the audience gave an enthusiastic standing ovation to show their appreciation of the music and its performance.

After the performance of “The Evolution of an Ocean Composition”, Mr. Lessard informed the Gates students that they too would soon premiere a composition in honor of Stellwagen Bank Marine National Sanctuary.  The new work is called “Salt.” It is named after the most famous humpback whale that visits the waters of Stellwagen Bank.

The composition follows Salt’s life for one year as she bears a calf off the coast of the Dominican Republic and then introduces her calf to Stellwagen Bank.  The music was written by composer Jacquelyn Hazle.  It was set to premiere in May of 2020, but was indefinitely delayed by the pandemic.  The project was commissioned by Stellwagen Bank Marine National Sanctuary and funded by local philanthropists.  The Gates 7/8 Band will premiere the work in the Spring of 2023.

World’s Largest Heart and a Piece of Cake 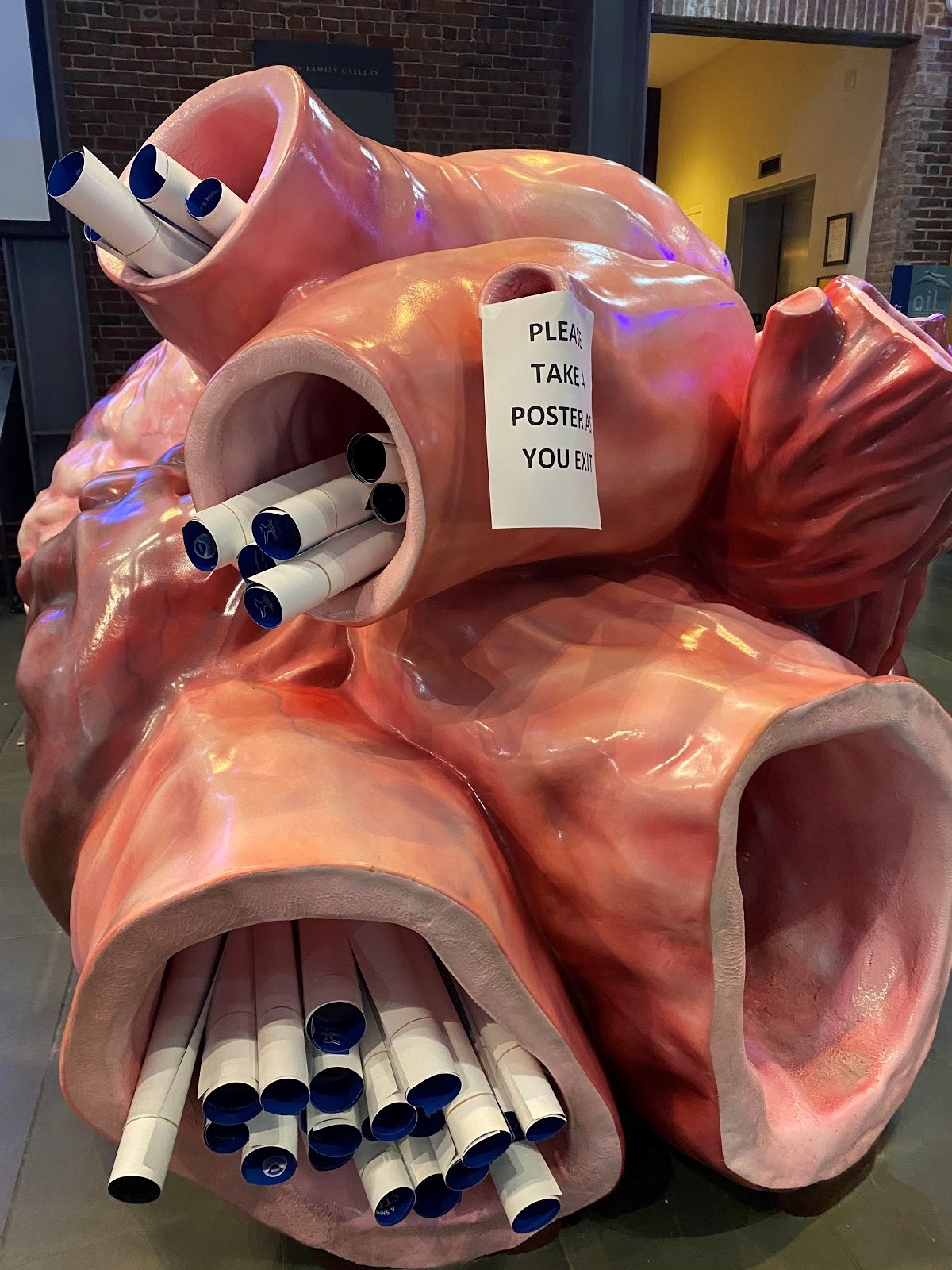 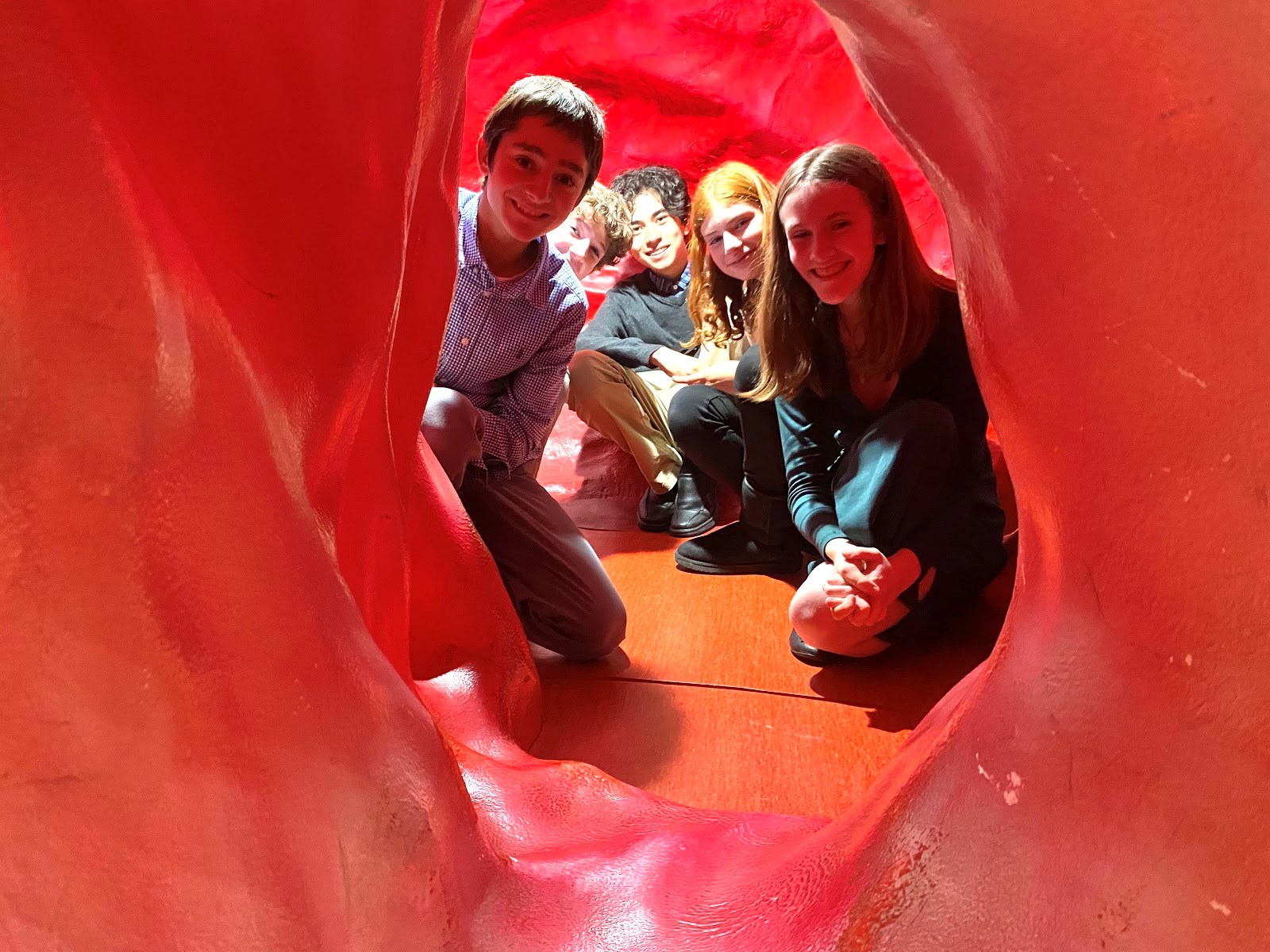 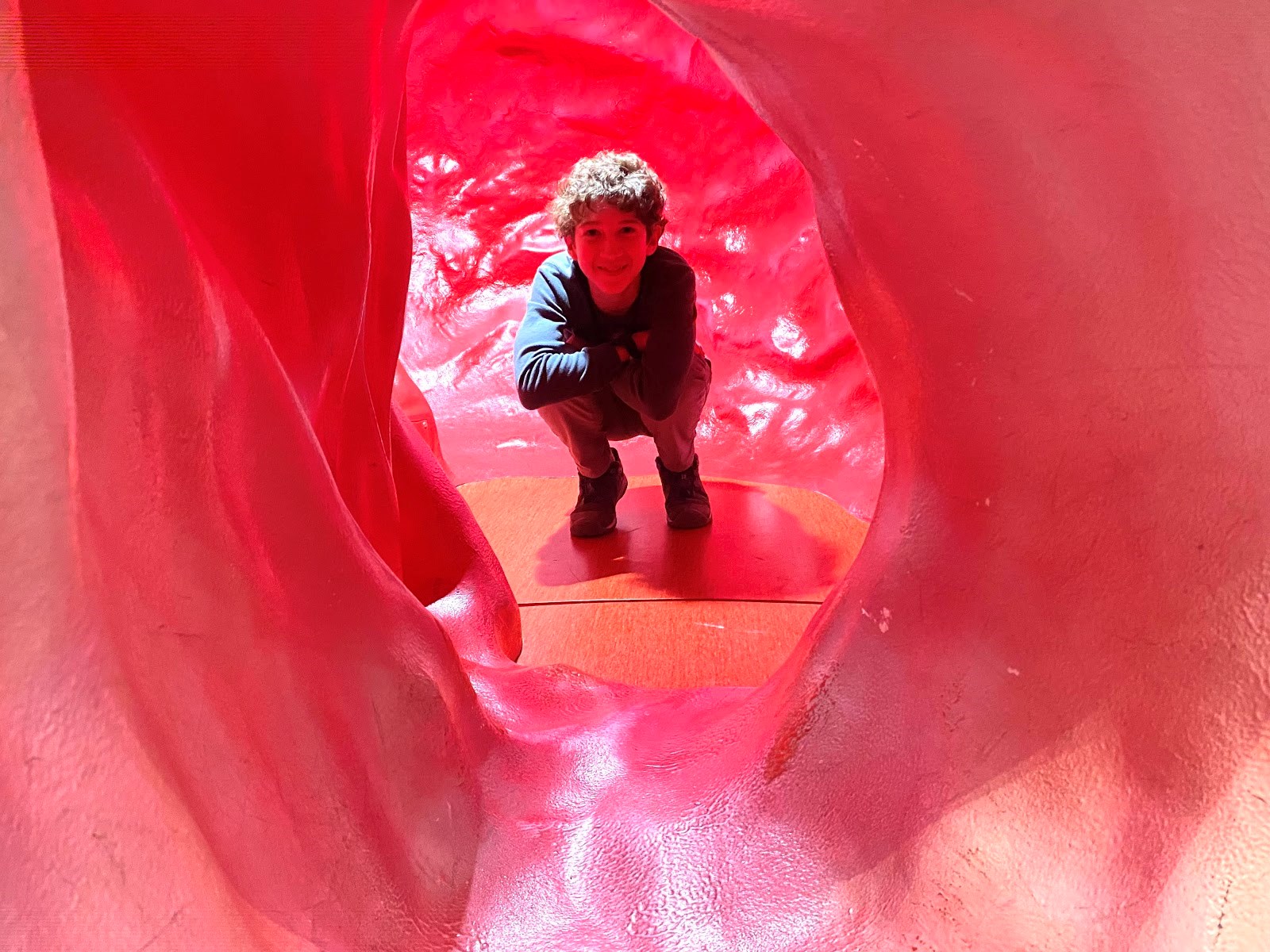 Jacob Simmer and Ms. Chambers were enthralled by the exhibits in the New Bedford Whaling Museum.  They were inspired to start planning the Environmental Club’s annual Stellwagen Day.  They hope to replicate several of the exhibits for all of the Gates students.  Stellwagen Day is a collaboration with the National Marine Sanctuary.  It is eagerly anticipated each year as the day when a life size humpback whale replica makes its appearance in the Gates cafeteria. 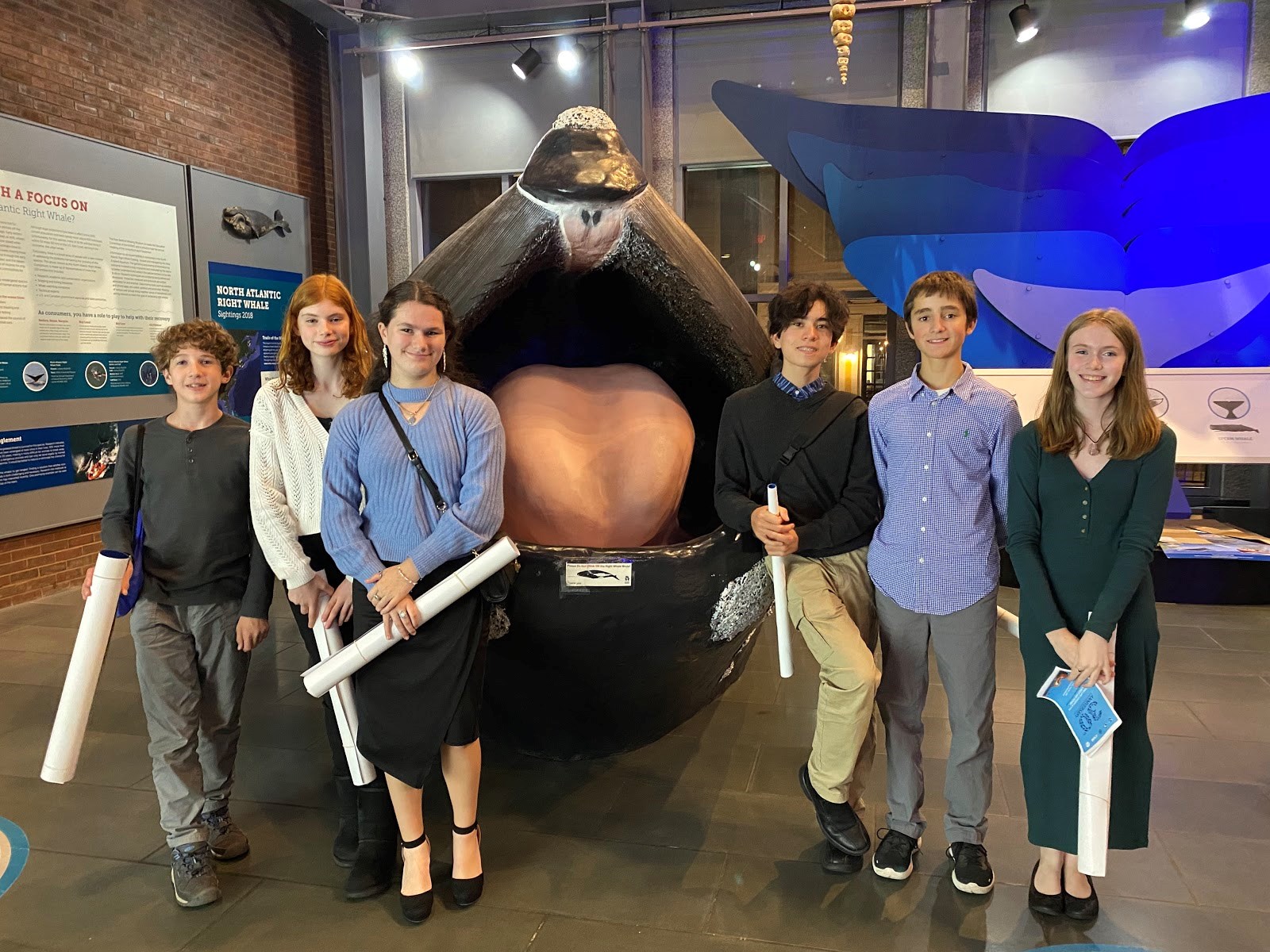 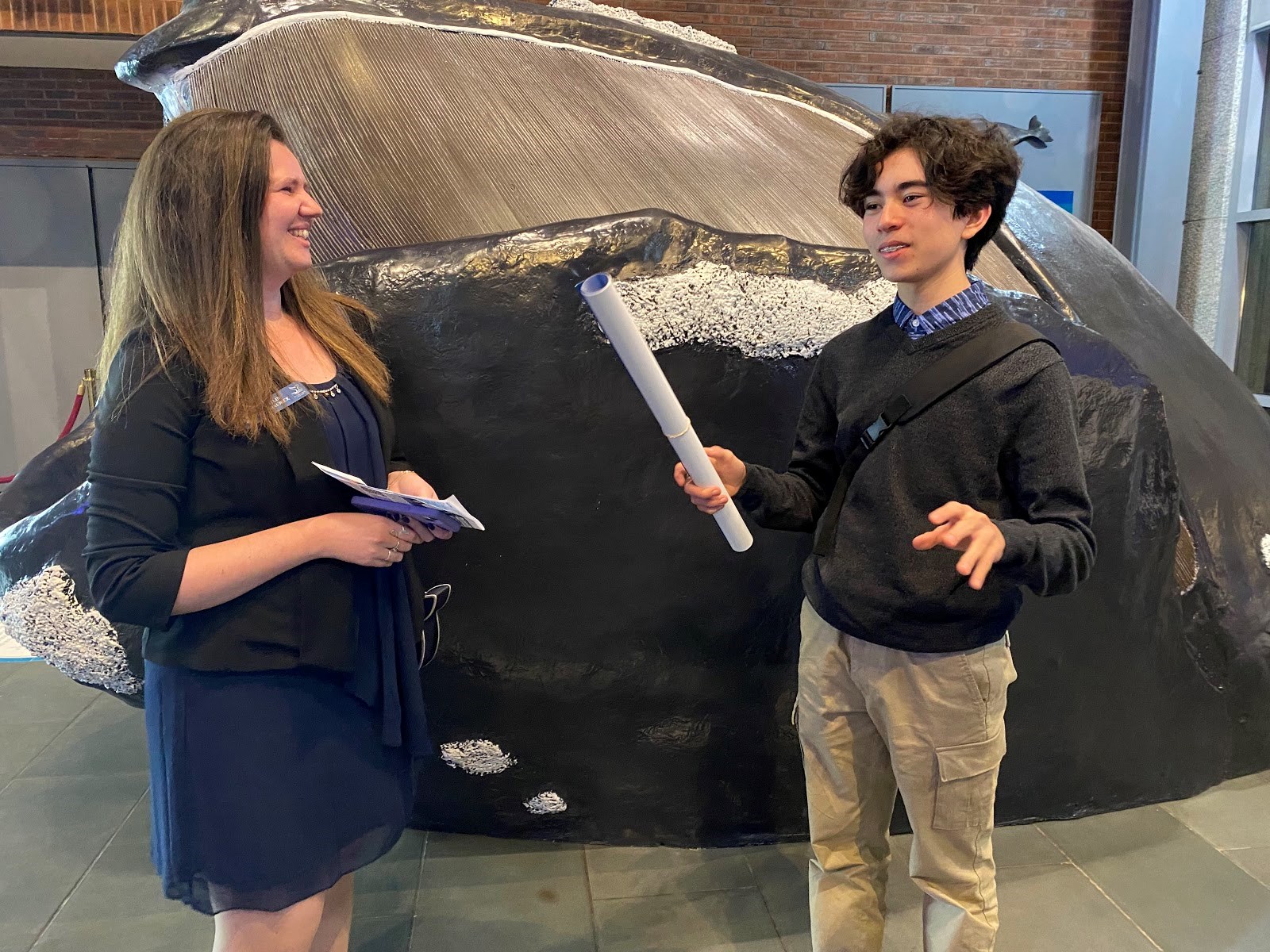 The evening concluded with the students enjoying slices of a large cake decorated as a whale.  This was an outstanding field trip.  The students learned a lot while having tremendous fun!  Congratulations to Ms. Chambers for her hard work and outstanding effort to lead this field trip!